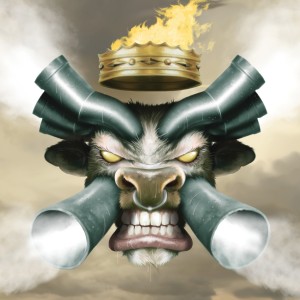 Three years since their last album and Dave Wyndorf and co are back with “Mastermind”. Following his overdose at the start of 2006 and the subsequent, rather lacklustre album “4-Way Diablo” in 2007 I wondered if the Monster Magnet I fell in love with way back in 1995 were finally gone for good. So it is with rather a lot of joy and relief that I can announce “Mastermind” finally puts those devil horns back into the air with gusto!

Monster Magnet have never approached their particular brand of balls-out rock ‘n’ roll with any airs or graces, they are not trying to be hip or cool, they’re just out to get drunk/laid/stoned (although Dave may well have stepped away from the latter now) and have a bloody good time! Consequently they tend to get ignored by a lot of the more ‘trendy’ music websites/publications, in fact I wasn’t aware this was out until I read a mediocre review in the Guardian of all places!

There is a lot of talk around this album being back to the heady days of “Dopes To Infinity” (1995) and although I can’t personally put it right up there with Dopes it’s definitely the best thing they’ve done since 1998’s “Powertrip“.

The album kicks right into gear with “Hallucination Bomb”, a bass rumble starts it off  followed by the rather apt first line “Welcome to the grand adventure/You’ll want it fast but you’ll take it slow”, which is a bit how I felt when I first put the CD on!

Next track “Bored With Sorcery” has a similar stomping riff to “The Right Stuff”, the cover version on 2004’s “Monolithic Baby!“, but to be honest that’s no bad thing, I can imagine live this track will get the pit heaving!

This formula is pretty much carried through the album apart from the synth-backed slow-down of “The Titan Who Cried Like A Baby”, on first listen I wasn’t that impressed, it seemed a bit like it should have been a wind-down track at the end of the album instead of track five, I feel it puts a bit of a premature brake on proceedings. On repeated listens the track has grown on me but I still maintain it’s in the wrong place.

The Guardian criticised this album for resorting to “tired stoner rock tropes” which, to me, is a bit like criticising Lady Gaga for just releasing pop songs and not releasing a Death Metal album, that’s surely what most MM fans want!

The album closes officially with “All Outta Nothin” (ignoring the two bonus tracks on the UK CD, Watch Me Fade and Fuzz Pig), a straightforward rock song with echoes of Turbonegro’s foot-stomping style. This should be their next single.

I’m happy and relieved that “Mastermind” is as good as it is, it’s nice to have you back guys. The only downside is that after the album was released it was announced that long-time member and lead guitarist Ed Mundell was leaving the band for personal reasons.

I am off to see them at The Corporation in Sheffield tonight (last.fm event) so we will see how they get on without him. According to Wikipedia Garrett Sweeny from Riotgod (drummer Bob Pantella’s other band) will be filling in for Ed on the tour.

Good to have the Bullgod back in style! (Listen on Spotify or Buy at Amazon.co.uk)

This entry was posted on November 20, 2010, 2:38 pm and is filed under Music Reviews. You can follow any responses to this entry through RSS 2.0. You can leave a response, or trackback from your own site.