In these days when technology allows game makers to go as big and brash and as violent as they like, it’s refreshing to see some studios realising that some of the best games have never relied on who’s got the flashiest graphics or the most photo-realistic environments, but it’s all down to gameplay, charm and striving to be original. In recent years with the advent of downloadable content it has freed developers to scale down and experiment more, giving us great little games like Flow, it’s pastoral successor Flower and the unexplainable bonkers-ness of Noby Noby Boy!

These aren’t truly games as such, much more like past-times, but Double Fine’s downloadable game Stacking is an adventure game in the truest sense, you wander around an environment, talking and interacting with other characters and using various abilities to solve puzzles. So far, so ordinary you may think, but things change when you realise the protagonists and indeed all the characters in the game are Russian Stacking Dolls! 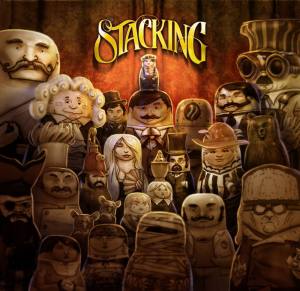 You play the part of Charlie Blackmore, the smallest of a family of chimney sweeps (?) who are captured by the evil Baron, who has also enslaved all the children to work in his various factories, zeppellins and steam tanks. By utilising Charlie’s ability to “stack” with dolls increasingly larger than him, your task is to free the children and rescue your family!

The style of the game is to present it like a silent film, the cut-scenes are accompanied by the sounds of a film projector, there are no spoken parts, speech is imparted by silent movie style text screens in the cut-scenes and in speech bubbles in-game. Although this is a game featuring and revolving around inanimate wooden dolls, it never looks anything but gorgeous, the light effects and reflections off each individual doll are beautiful, and the animation effects as your doll moves, splitting to reveal the smaller character within, is a very effective way of giving movement to a character with no moving features!

"I'd give it five minutes if I were you!"

As well as following the main objectives to find and rescue each of your family members, there are myriad bonus challenges and collectibles that made me return to find/finish them after I’d completed the main game. Puzzles are solved using the special abilities that each different type of dolls possess (one doll looking like a victorian boxer delivers an uppercut, another, a vampish female doll, seduces male dolls with a wiggle of her hips (see pic at bottom of post)), sometimes combining effects to achieve the desired result. The game also rewards solving some challenges in different ways, encouraging you to think outside the box, however if you do get stuck the game uses a handy three stage hint system if required.

The only other game I’ve played developed by Double Fine was the fantastic but criminally ignored Psychonauts for the PS2 which had frequent laugh out loud moments, and you can see similar humour in Stacking, the surreal characters, the toilet humour (more than one doll’s special ability is to fart hugely!) and the charm bringing the game up from what could be a twee overload in the hands of lesser developers, it is about dolls after all!

The skill levels suit a non-hardcore gamer like myself, that’s not to say it’s easy, but if you’ve got any experience of adventure games the challenges probably won’t hold you up for long. All in all I think it took me approximately five or six hours to complete (that includes all collectibles), so bearing in mind this game only costs £8.99 I think it’s pretty good value. As I have managed to get 100% of the challenges and collectibles I’m not sure of much replay value, but for the enjoyment I got I have no complaints.

I don’t play a huge number of games and the majority of them do not make feel like writing anything about them (except the God of War trilogy which I may do something on in the future), but this little game deserves to be seen and played by more people, and developers like Double Fine need to be encouraged to make more like this!

This entry was posted on March 7, 2011, 6:17 pm and is filed under Game Reviews. You can follow any responses to this entry through RSS 2.0. You can leave a response, or trackback from your own site.