I thought I’d visited most of the live music venues in Leeds over the last ten years of gig going, I’ve almost lost my weight in perspiration in the sweatbox of The Cockpit, I’ve socialised at The Brudenell Social Club, and I’ve thrilled to the strains of A Hawk and a Hacksaw and the Hun Hangar Ensemble in the Leeds Holy Trinity Church. So I was intrigued when I saw that Leicester purveyors of epicness Her Name Is Calla were playing a place called Left Bank, but after looking at the website I couldn’t work out where a place that looked like this was located on Cardigan Road, I’d driven down that road plenty of times. So on another foray to check out the location on Friday before I set out for the gig last night I located what appears as a large, plain red brick building that betrayed absolutely nothing of the architectural splendour of the interior; 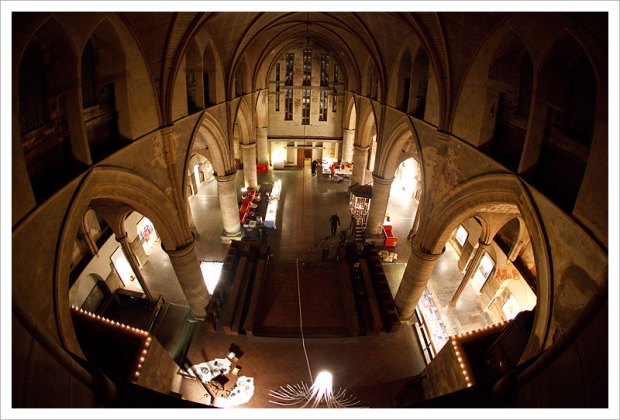 Walking into the place was a bit like walking into a Tardis, you almost wanted to run back outside to check you were still in the same unassuming looking building you walked into! During the day there had been a Facebook update from the band advising us to wrap up warm as the place has as yet no form of heating, I was thankful to have received this warning as when we walked in it seemed colder inside than it was out in the open air, it’s just as well the gig wasn’t in the depth of winter!

The cavernous interior was set out with a few sofas (when did you last go to a gig where you could sit on sofas?) and some tables and chairs in front of the stage. Trestle tables had been set up for merch and for canned beverages or hot drinks (a very sensible addition in the circumstances!)

First on were Birds of Passage, or should I say “was” as Birds of Passage is in fact just multi instrumentalist Alicia Merz from New Zealand on her first tour of the UK and Europe. She crafts ethereal, ambient, almost drone-like songs, her voice like a breathy whisper in your ears. I had listened to her debut album (streaming on bandcamp) and was looking forward to how it would sound in the environs of the old church.

Birds of Passage – The Patterns On Your Face

It did sound good, but I feel the performance suffered slightly from the extended periods of silence while changing instruments or setting up the laptop for the next track, I think she could have done with an assistant to help her out. It did start to get a little samey and for me the coldness of the venue worked against her, I think her music would fit better in a warm cosy location! When she did speak to the audience her voice was so quiet as to be inaudible but I will put this down to nerves and shyness on the first night of the tour, hopefully she’ll get a bit more confident and open up a bit more on later dates (I’ve subsequently found out this was her first ever gig, so it’s all totally forgiveable!).

There seemed to be a fair bit of faff while waiting for Calla to begin, the problems I guess of being in a venue with no full time employed roadies and sound engineers. They eventually got underway with the gentle piano notes of Moss Giant. Tom informed us later that the delay had been due to a problem with a particular cable and the ensuing “brainstorm” resulted in losing twenty minutes from the set!

I was surprised and a little disappointed that there was no sign of the new songs off the new “Maw” EP as I would have liked to have heard them live, but I guess they were possibly excised due to the problems with the technology.

They instead played mostly tracks off last year’s The Quiet Lamb and finished on their now trademark thrash through New England from their mini album The Heritage.

In contrast to the shyness and introspection of Birds of Passage, the on stage banter from Her Name Is Calla is effortless and oozes confidence, the sign of a band fully comfortable in what they’re doing and how they do it, Tom’s words to the audience honest and funny, acting to draw us in and really make us part of the experience even in such a cold setting. I’ve said it before and I’ll say it again, this band deserve much bigger audiences!

This is a band whose music fits beautifully in the centre of an old church, their delicate pieces benefiting and feeding off the echoes of the cavernous interior and the build up to, and the pay off of the louder sections of tracks such as Condor & River and aforementioned closer New England filling the massive spaces with glorious noise! They played the Leeds Holy Trinity Church last year and I was unable to go but having heard the track “Nylon” recorded live there on a previous occasion which is on the Blood Promise EP (you can hear it at the bottom of this post) I realised that if they played this sort of venue again I would be there with bells on! And so I was (sans bells) and was not disappointed.

Although the set was reduced and I could listen to these guys all night long, by the time they finished I was feckin’ freezing so was quite glad to be able to get into the car and get the heater on! Hopefully if they start putting on more bands here they’ll get some form of rudimentary heating sorted out for the cooler months of the year.

This entry was posted on March 28, 2011, 2:08 pm and is filed under Live Reviews. You can follow any responses to this entry through RSS 2.0. You can leave a response, or trackback from your own site.