I must admit I am a bit of a sucker for limited editions of things, those two words giving a sometimes illusory feeling of exclusivity and rarity value. Except nowadays, where even the most successful of bands sell hundreds maybe thousands instead of hundreds of thousands of albums the super groups of the past could shift, the rarity and collectors value of these ‘limited editions’ has been somewhat undermined. So I am fully aware that ‘sucker’ is often the appropriate word here, “look Rich, you could be one of just a 1,000 people to own this particular album”, all the while (almost wilfully) ignoring the fact that the album in question may only be expected to sell seven or eight hundred units in total! A fact that critics of the annual Record Store Day scrum to buy limited releases of stuff delight in repeating around April time.

But so what, in reality I know that most of these records are not bought thinking they will be worth anything to anyone in the future, I’m not planning on selling them or bequeathing them to my non-existent offspring. However in these days of austerity one has to think a bit carefully around the aspect of price. So when Killing Joke announced they were going to release a ‘super deluxe box set’ version of their upcoming 3CD singles retrospective at a rather eye watering price I initially discounted it as folly.

Then I read a bit more of what was to be included, instead of 3 CDs the box set would include 33 individual CDs of each single (adorned with its original artwork) with its respective b-side (the 3 disc album released in the shops contains no b-sides) plus a disc of rarities and unreleased studio recordings. All of this would be presented in a custom made hinged ‘cigar box’, a certificate signed by all the band, a 32 page bound full colour book, a poster designed and signed by long time Killing Joke artist Mike Coles and, bizarrely, an aluminium cigar tube containing the wrapper of a cigar smoked by Jaz Coleman during the recordings of 2006’s Hosannas From The Basements of Hell.

Even so the price was still rather steep but I decided that it was no more than a couple of tanks of petrol for the car and, unlike a lot of the more obscure bands and releases I listen to, Killing Joke are a pretty major name and this could well be an investment as there will only be around 300 of them, so I thought fuck it, and ordered one.

And here it is; 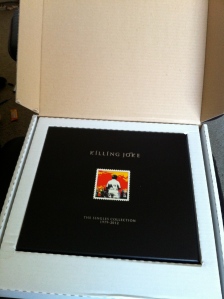 It is a really nicely put together collection, the box is solid and weighty with a really classy finish. Ribbons set into the box allow you access to all the individual CDs easily.

As I am unfamiliar with the B sides (and indeed some of the singles!) I am looking forward to ploughing through them all. I was initially thinking of blogging my first listen but as there are 64 tracks, not including the disc of rarities I think I will make do with showing a picture of all the discs that are included to give you an idea why I decided to not write about them all! 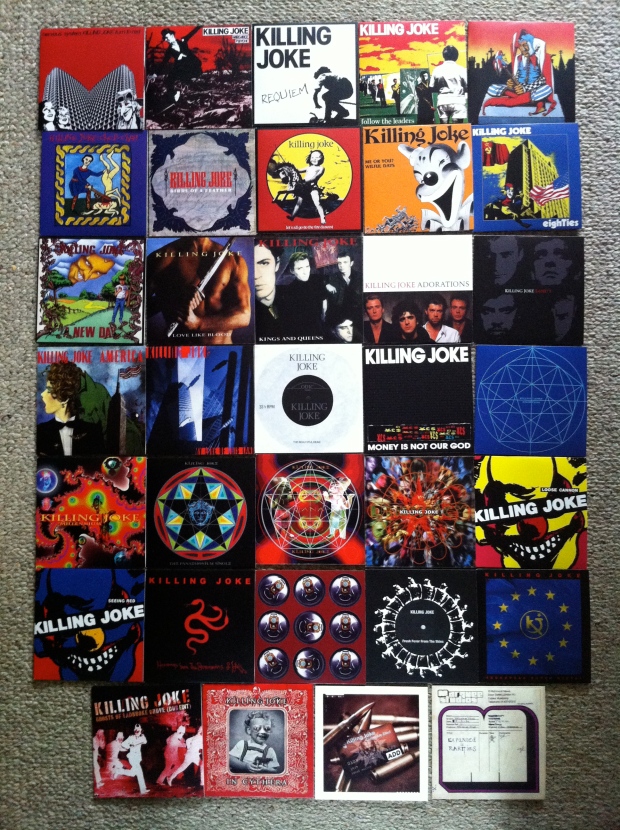 I will attempt to do another post to review the actual content once I have listened to it all, watch this space!

This entry was posted on June 27, 2013, 2:14 pm and is filed under Music Reviews. You can follow any responses to this entry through RSS 2.0. You can leave a response, or trackback from your own site.